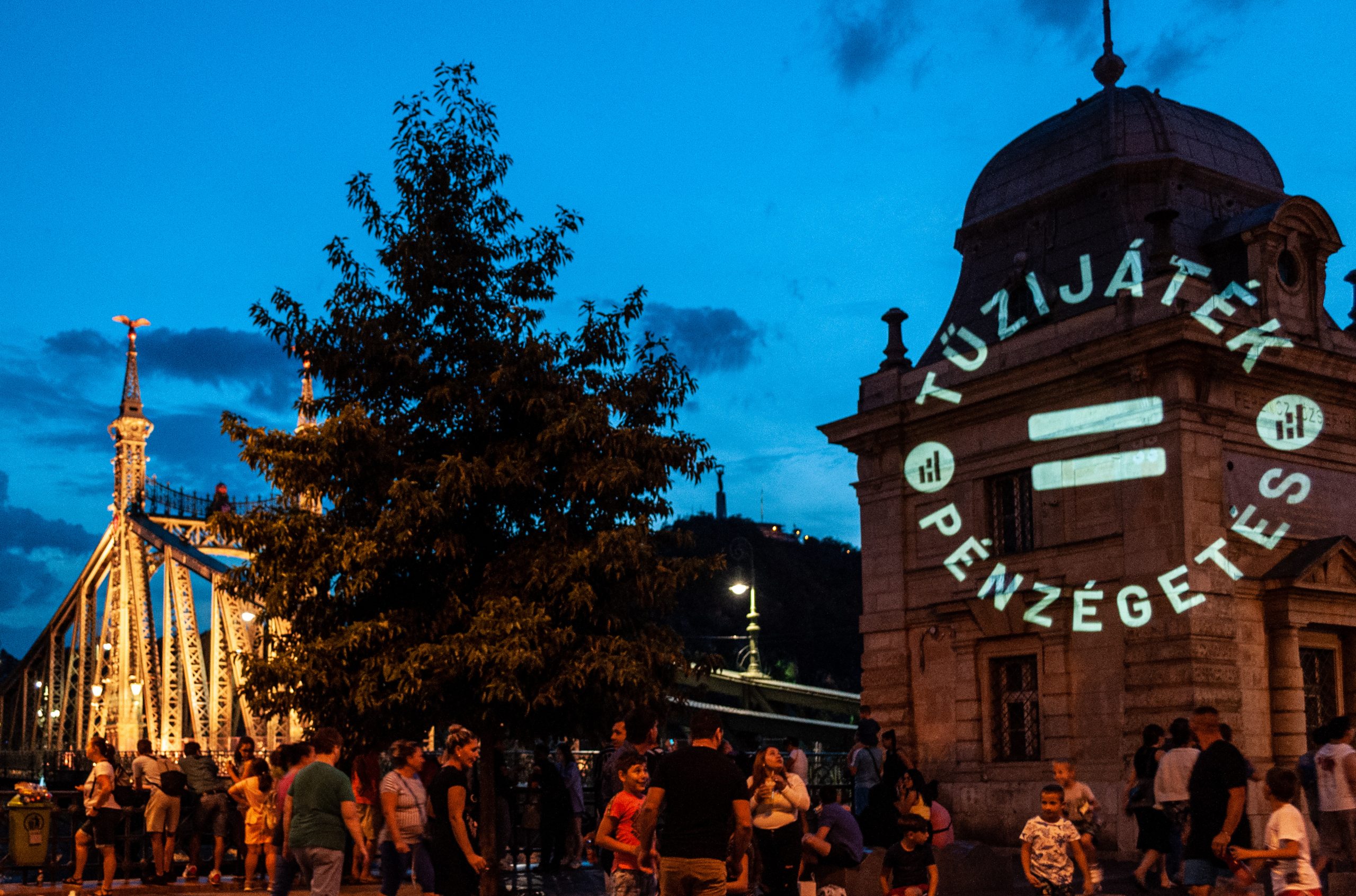 Worthy commemorations of our holidays and shared experiences related to them are necessary – this is something we have never disputed. However, it is possible to do so in a different, smarter, more environmentally friendly and humane way.

This is the third year we have protested against the government spending billions of forints from our money on fireworks. On July 18, 2020, we celebrated together that the government had refrained from using fireworks that pollute the environment and endanger animals – meeting the demands of the 130,000 people who protested on SzabadaHang by signing the related petition. Together with animal rights organizations, we also set an example of a wallet- and animal-friendly celebration: visitors to Szabadság Square in Budapest could enjoy a fire dance show and light painting.

This year, we started protesting again, and this campaign reached a milestone on August 27th. At the beginning of July, a petition was launched on the SzabadaHang website, in which we asked the government not to organize Europe’s largest fireworks display in the current economic situation. Already in the days following the launch of the petition, tens of thousands of people signed our demands and agreed that instead of such entertainment that tortures the environment and animals, there are alternative ways to commemorate the founding of the Hungarian state with pride and dignity, and it does not cost billions of forints.

It is incomprehensible why, with food prices rising, inflation increasing day by day, the forint depreciating and another economic, energy and social crisis looming, the government should decide to spend unprecedented amounts of money in a single day. During the campaign we organized several actions to make decision-makers see reason and, together with hundreds of thousands of signatories, convince them that a responsible government does not spend taxpayers’ money on fireworks in this kind of situation.

First, we took a walk on Margaret Island to ask passers-by what they thought about the government blowing billions of forints in a matter of thirty minutes. The consensus was that August 20 and the founding of the state are important, but in the current economic climate, the cost of fireworks should be spent on more important matters.

Following that, we visited Péter Ovádi, the Government Commissioner for Animal Welfare, in Veszprém during his consulting hours, to ask him, together with aHang members in Budapest and Veszprém, what he thinks about the August 20 fireworks and the protection of animals in this regard. We handed him the petition but received no substantive answers, only that he did not think the fireworks were a priority for animal welfare at the moment.

When the petition had more than 150,000 signatures and the government was under increasing pressure, Zoltán Kovács, Hungary’s Minister of State for Government Communication, reacted to the protest, calling it sheer political incitement. We then decided to demonstrate in front of the Hungarian Tourism Agency, which is supervised by Antal Rogán, head of the Cabinet Office of the Prime Minister, commonly referred to as Hungary’s propaganda ministry. The agency is responsible for organizing the series of programs on August 20.

On 3 August, along with our petition, we also handed the agency a series of questions asking how many bidders had successfully applied to host the fireworks, or what the costs would be if the event had to be cancelled due to bad weather conditions. During our action combined with a press conference, several signatories took the megaphone to say why they are against holding the fireworks.

Despite having sent our questions to the leaders of the tourism agency, Antal Rogán, and Prime Minister Viktor Orbán, they did not even care to give an answer to the then more than 180,000 protesting signatories.

Two weeks before August 20, we started a new action, and thanks to our supporters we were able to have thousands of stickers, posters and badges made, with which more than 150 activists covered the locations of the events and the fireworks happening that day in Budapest. 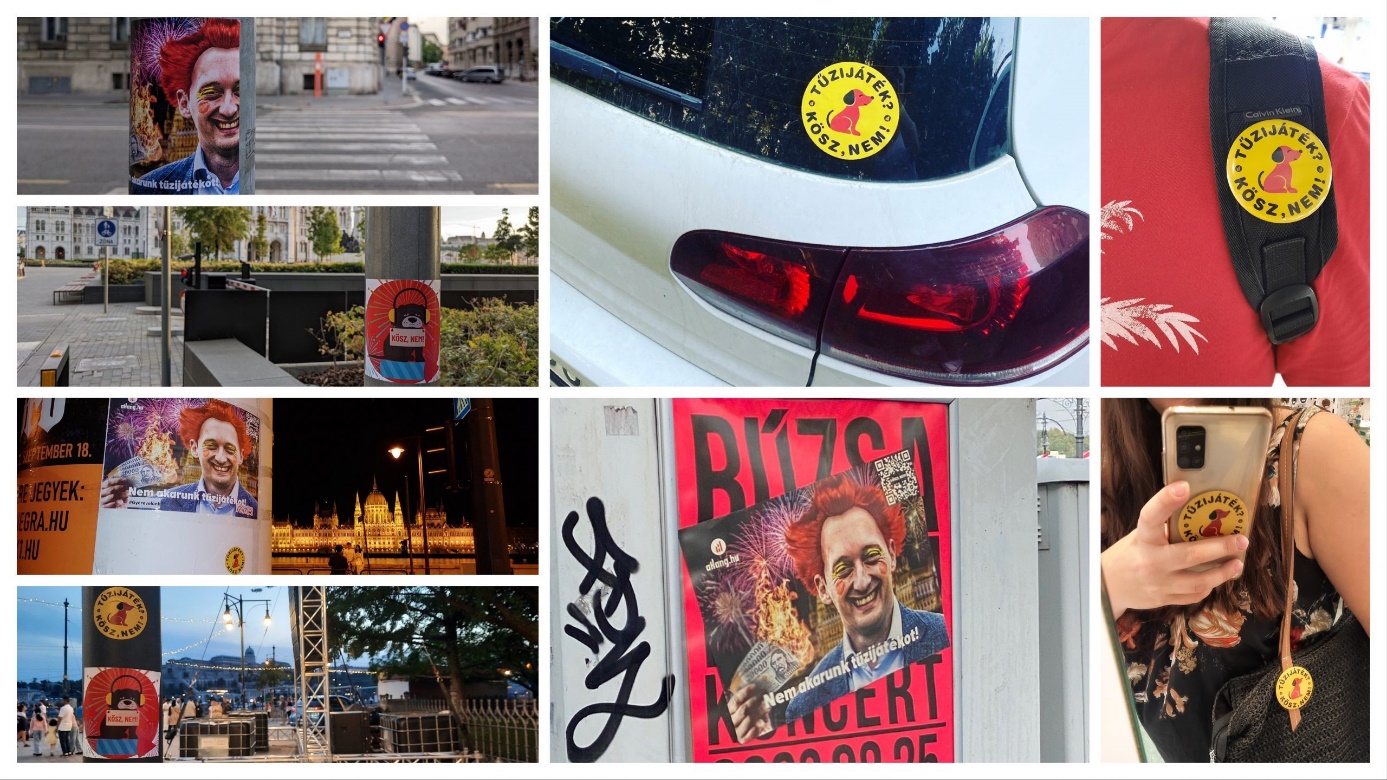 On the afternoon of August 20, the organizers cancelled the fireworks due to the weather forecast – but since there was no storm in the end, the heads of the Hungarian Meteorological Service were fired on the following Monday. The new date for the fireworks was set for 27 August, which meant that another hefty bill had to be paid in order to guard and secure the sites where the fireworks had been set up.

Even though more and more people were demanding that the government refrain from spending billions of euros after the fireworks could not be held on the day of founding of the state, the political-ideological reasons of the decision-makers proved to be stronger.

Finally, on 27 August, we went to the quayside in Budapest to show and make people aware that the fireworks are nothing but money burning. With community funding, we bought two projectors to send the message to decision-makers with a light show before and after the fireworks. Thousands of people watched the fireworks at Liberty Bridge and at Kossuth Square near the Prime Minister’s Office, so they all got our message.

With our campaign messages, we highlighted the hypocrisy of the government: while they are spending billions of forints on Europe’s largest fireworks display, they call on the public to save money. We received an overwhelmingly positive response to our screening action on the spot. Perhaps the nicest was when a passer-by said it was worth more than the whole fireworks display. 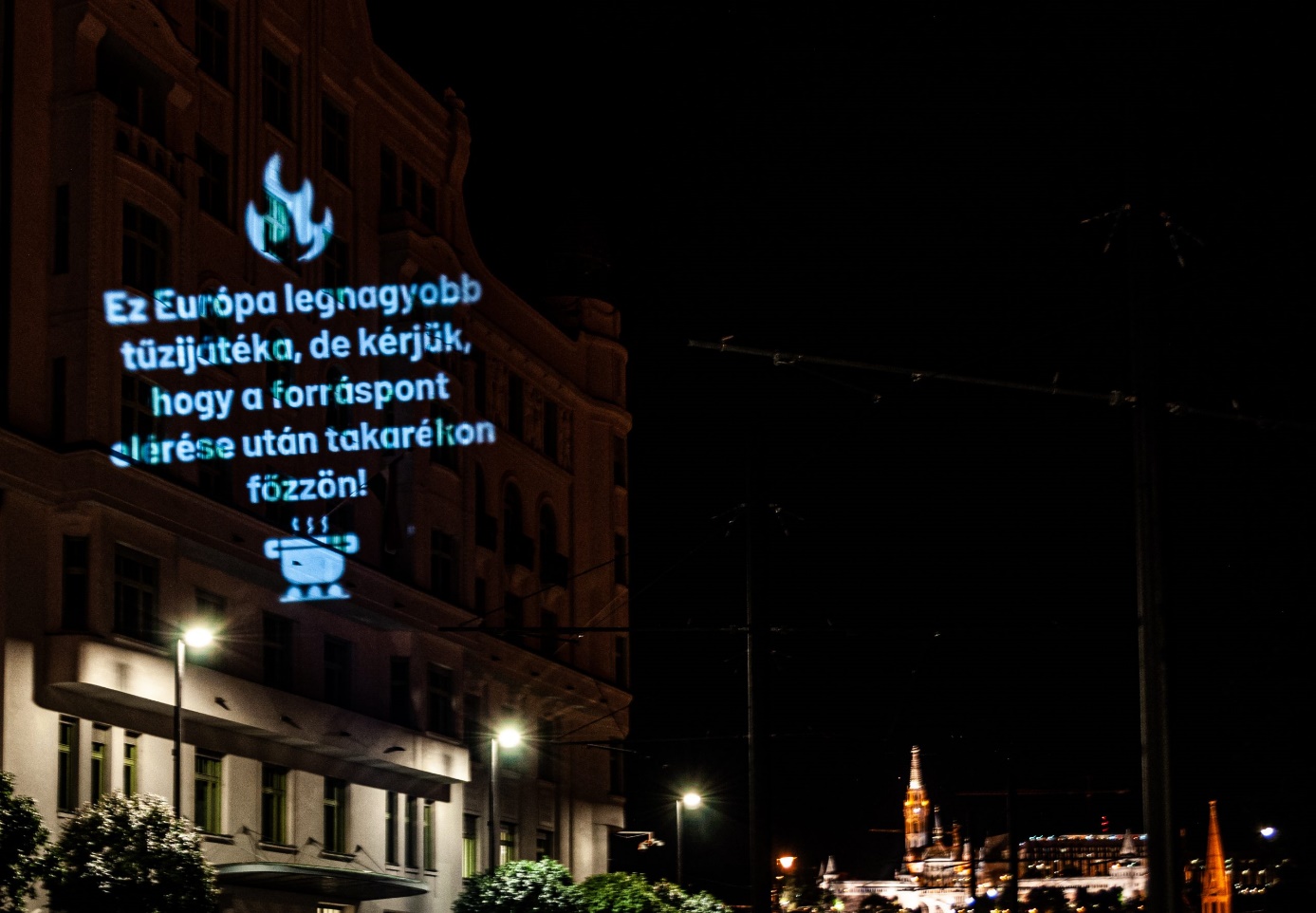 This year’s campaign ended up becoming the largest active petition in Hungary, with nearly 200,000 signatures, but the government did not back down. Even so, our campaign was not without outcomes, with many towns and cities cancelling their fireworks and deciding to use the money for social causes.

We will not stop and we will not give up! Over the next period we will be assessing the impact of fireworks on pets and how many of them have fled their homes; and with dozens of municipalities having called off the fireworks this year, we want to see these changes last.

We continue to argue that instead of toxic, polluting and animal-killing fireworks, we need to find an alternative that offers the opportunity to celebrate with pride and dignity.